They Held Such Promise . . . some thoughts on the League of the South

This past Monday we had our monthly meeting of Free Florida First. My presentation to our little group was entitled: “Some Insights on the Southern Movement: The Good, the Bad, and the Ugly.”

Unfortunately, the League of the South has of recent years become associated with, and composed of, folks that we have very little in common with. We certainly do not believe that they represent the culture, or the civilization, or the faith of the Old South. They seem more to be advocating something like a New Reich.

While I went into some detail on Monday night, I can only share a couple of examples here; I think they should suffice:

1. One individual, who had been stricken from the League’s membership in 2013 because of his association with neo-Nazis, was subsequently returned to its rolls. I’m not sure of his present membership status. In any case, he also formed his own organization called the Traditionalist Worker Party. If that name is not off-putting enough, you may find a Youtube video of Mr. Matthew Heimbach extolling the virtues of National Socialism; it was published in February of 2017.

2. In April of this year, the League of the South had a contingent at a street demonstration in Pikeville, Kentucky. The event, which seemed orchestrated, featured Antifa thugs on one side of the police line and the League of the South, the Nazis, and the KKK on the other – shouting expletives and chanting slogans towards one another. Below is a picture of Isaac Shelby Baker with one of his fellow protestors. Mr. Baker is purported to be the Commander of the League’s “Southern Defense Force” in Kentucky. When he posted this picture to his own Facebook account he commented: “This should make some heads explode. My care factor: Zero.” 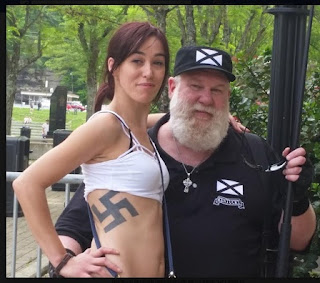 And here is a picture that Dr. Hill posted with his friend “Ike” on the National League website. 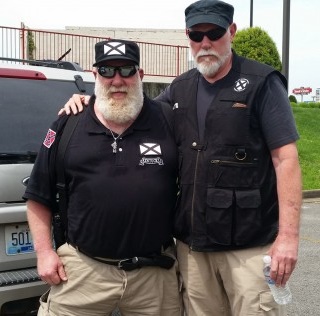 3. The Keynote Speaker for the League of the South’s National Conference, held in June of 2017, was none other than Mr. David Duke of KKK and Nazi fame. His reputation precedes him, so I’ll say no more.

4. I could add example upon example, including dealings with current League members, revealing not only their political inclinations and associations, but also their filthy and vile communications.

I don’t see how the League could be upset with the publication of these facts; they are out there loudly and proudly advocating them on a daily basis. I’m just thankful that we have had no association with the League for several years now. If I had been more perceptive and smarter, we would have been gone much sooner.

Here’s what I see as a bottom-line. We at Free Florida First (and several other pro-Confederate and pro-secessionist organizations of which I am aware) advocate for increased liberty and individual freedom. The League and their associates are advocating an agenda that will require a BIGGER and STRONGER government . . . one which they hope to sit atop.

I suppose that I can take some solace in the fact that many honorable men have the left the League over the years -- some before us, some after us. Again, I should have seen the writing on the wall sooner, but I did not know the true Michael Hill as well as many of these other more prominent men did. To my knowledge, none of the original founders would still identify themselves with the League and its new agenda.

How things got to this point, I really don’t know. I never was privy to all the inner workings. I thought that the original League had almost limitless potential for good. Unfortunately, that potential was never realized and it has come to naught – or worse.

What troubles me most is that some men -- men that I still want to count as honorable and as friends -- continue to have at least a nominal association with the League. I can only hope that it is because they have not been paying close attention to what has happened. I would implore them to open their eyes.

I suppose that I may feel compelled take this up again in the future, but sincerely hope that this will suffice. I don’t want to make a career of attacking the League or of establishing WHO WE ARE NOT. I did, however, believe that these brief words were necessary at this time.


When we first left the League I could say that we bore them no ill will. I’m not sure I can honestly say that any longer. I see very little that can be considered as a positive any longer. I would leave them with this blessing: “May you return to your pro-Liberty, Christian, and Southern roots.” Unfortunately, I have no expectation of seeing that come to pass.