Wearied by the Federal Footmen

At the beginning of this year the Florida legislature passed and the governor signed into law the “Sunshine Protection Act.” This legislation was designed to keep Florida on Daylight Savings Time year around.  However, this past weekend folks across the state once again moved their clocks back one hour and transitioned from Daylight Saving Time to Standard Time. 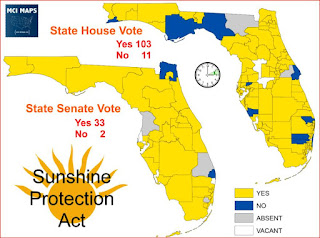 Why you may ask? Well, supposedly Florida needed the approval of the US Congress to make such a change and that thoroughly corrupt and worse than useless Congress never got around to lending its approval. So we did not have “permission.”

If Florida still had any true statesmen, we would just have maintained Daylight Savings Time WITHOUT THE APPROVAL OF THE FEDERAL LEVIATHAN! We just would have said: “Florida is staying on Daylight Saving Time anyway! We care nothing for the approval of the District of Corruption.”

Unfortunately, our state and local politicians are devoid of even the smallest grain of courage. And I ask you, if they cannot stand up to Federal tyranny over such a small matter as a time change, how can we ever expect them to stand up for more important things such as protecting life of the unborn, or our God-given rights to self-defense, etc.?

The spineless cowards in Tallahassee cannot even run with Federal footmen (the infantry), so what will they do when the horses (the cavalry) arrives? I’ll tell you what they will do, they will turn tail and hide or join with our Federal despoilers. 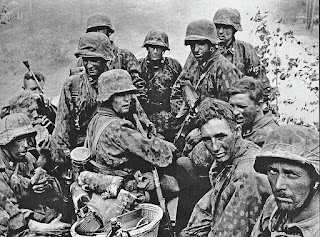 And that, my friends, is why I will not vote for ANYONE running for office. None of them even understand the simple doctrine of NULLIFICATION, where local governments and states stand up for the rights of the governed and exert their self-determination, in spite of Federal dictates and threatenings. None of them care for their constituents. They serve not the people, but rather the central government.

So long as our supposed “leaders” do not have the gumption to stand up to Federal tyranny, even in the smallest of things, I see no prospect of avoiding our total enslavement. For all intents and purposes, we are already there.

In spite of all, my trust remains in a Sovereign God who works all things for the good of His chosen people!

Our politicians may lack backbone and a sense of duty, but let us not join with them in their faithlessness by encouraging them with a vote of confidence!

I STILL DO NOT CONSENT!

CLICK HERE to be added to our email list.
Posted by Greg Wilson at 2:46 AM No comments: 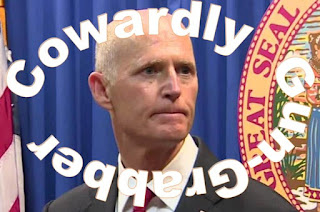 This week I received an interesting email from Dudley Brown, the Director of the National Association for Gun Rights. He expressed his disappointed in Rick Scott, Florida’s current Republican Governor, who is running for the US Senate seat currently held by long-time Democratic incumbent, Bill Nelson.

Scott sold out our gun rights earlier this year in signing the most anti-gun-rights legislation to have seen the light of day in Florida for many years. Now, in his race against Nelson, he is bragging about his ability to impose gun control on Floridians. Scott has actually done more damage to the natural rights of Floridians than Nelson was able to do in his almost three decades in Washington as either a Congressman or Senator.

Dudley points out some of Scott’s depredations:

- Signed a bill disarming law-abiding adults under the age of 21, leaving roughly one million citizens defenseless.

- Signed a bill BANNING certain firearm accessories and makes it a felony to own a piece of plastic.

- Signed a bill STRIPPING up to 3.5 million law-abiding Floridians of their rights WITHOUT any due process.

I’m not a big fan of the compromising NRA, my favorite blogger calls them: “The largest, most powerful gun control organization on earth.” Nevertheless, the grades they assign to politicians does give some indication of how opposed to citizens’ God-given rights a politician may be. The most recently assigned grades gives Scott a “C” (which the NRA cautions is “not necessarily a passing grade.”). Nelson was assigned an “Fx”, indicating “a true enemy of gun owners’ rights . . . who requested and received the endorsement of Bloomberg’s anti-gun groups.”

Not much of a choice – so just don’t play their stupid game. Don’t vote for either. 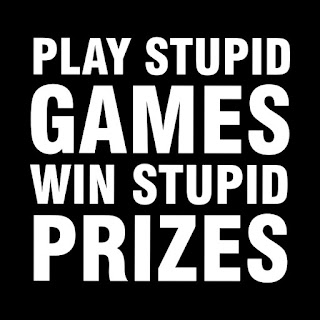 In his email, Dudley notes: “The damage Rick Scott did to the Second Amendment in Florida far surpasses anything Bill Nelson was able to pull off, even while Barack Obama was President. . . . But as hostile as Bill Nelson’s intentions are to your Second Amendment rights, all of his efforts failed. Rick Scott actually championed and signed gun control into law in Florida. And Rick Scott wants to go to Washington and drag other Republicans into nationalizing his gun control law. . . .
hell-bent on getting President Trump and other Republicans to compromise for gun control . . . Mark my words, a vote for Rick Scott is a vote to give Chuck Schumer not just ONE vote for gun control, but several. . . . Because the next time the radical left and anti-gun media zealots bang the gong for gun control, Rick Scott will be there to deliver two, three, or four other Republican Senators to the table. . . . the only option for voters who support the Second Amendment is to sit this one out.”

Dudley goes on to encourage folks to vote for supposedly pro-gun candidates in other contests. I, however, encourage you NOT TO VOTE AT ALL. NONE OF THEM, THAT I KNOW OF, ARE WORTHY OF MY VOTE. Remember, Rick Scott was once a “pro-gun” candidate!

I do not expect to ever participate in elections again. I suspect that the next meaningful votes will take place from the roof tops. 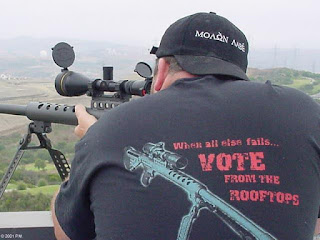 The only time that I will even consider casting a vote again is if it is for a candidate who actually understands what “shall not be infringed” means and who OPENLY advocates for the removals of ALL GUN LAWS. [They are ALREADY unconstitutional and WITHOUT lawful standing.] 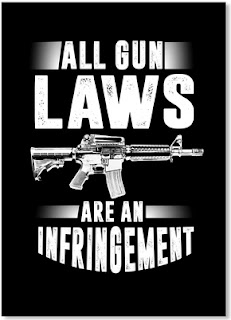 Additionally, I would only vote for a candidate who understands what interposition, nullification, and secession are and who will stand for those measures whenever appropriate.  Additionally anyone I would vote for must understand that taxation is theft and promise to work for the repeal of all taxes. I don’t see anyone like that on the horizon, and lacking that, I WILL NOT VOTE.  I will not vote for these spineless, compromising, liberty-hating, supposedly lessers of two evils. Instead I will spend whatever time I would waste in voting at the range and maintaining my firearms. You might consider doing the same. 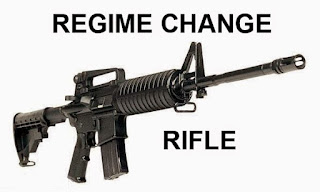 All I ask for is that a candidate supports and understands God-given rights; and that they acknowledge that those rights are recognized and protected in the U.S. Constitution. Don't they all take an oath to support and defend the Constitution? Really, is that asking too much? They are ALL manifestly liars. Show me one that is not, and I'll consider voting for them.
Free Florida First advocates for a Free, Independent, Godly, Prosperous, and Traditionally Southern Florida.

CLICK HERE to be added to our email list.
Posted by Greg Wilson at 4:41 AM No comments: