Showing the Colors in Newberry

Some random thoughts on our day at the Newberry Watermelon Festival

Free Florida First had an excellent day at the Newberry Watermelon Festival on Saturday, May 21, 2022 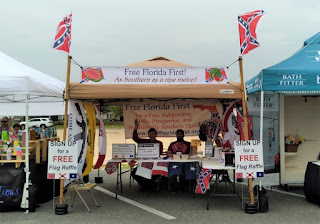 The weatherman had been calling for a rainout, but we did not experience any rain during our setup on Friday or during the festival on Saturday. The overcast skies and the breeze actually made the temperatures more tolerable.

We did have fewer folks sign up for our flag raffle than usual, but the threat of bad weather may have played a large part in keeping some away. Still it was a very productive day. We met many like-minded folks and had over 50 entries in our raffle, which then allows us to contact them one more time via email and postal letter. We also sold almost $120 in flags, which we hope will be on display around the area. Additionally, we distributed over 100 informational flyers about our organization and our beliefs to interested visitors.

Several folks expressed their appreciation for what we were doing and encouraged us to continue on. Lord willing we began some relationships that will endure. 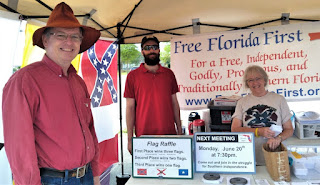 On top of it all we were able to consume some excellent catfish from one of the festival’s food vendors.

Our little band remains committed to getting out before the public and showing the colors as we are able. We continue to advocate for a Free, Independent, Godly, Prosperous, and Traditionally Southern Florida.

Our advocacy does not sit well with everyone, however. I had an interesting visit at the GOP booth just up the way from where we were located. Upon noticing that they offered a booklet on the Federalist Papers, I recommended that they consider adding some literature from the Anti-Federalist as well and that got an immediate negative reaction. One of the gentlemen, who recognized me from previous years, dismissed me as a “secessionist” (which I am), and he proudly lauded the Federal system and the Leviathan that is called the “United States”. So much for the GOP.

Those who are trusting in elections and the Republican party to save them from our current disaster are lashing themselves to a rapidly sinking ship. 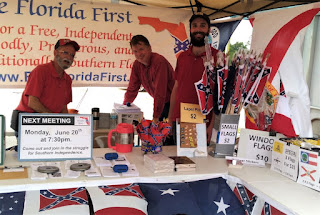 As always, we got an occasional nasty look, but I heard nary a word. It’s always interesting to see how some folks are suddenly struck deaf and blind when we attempt to engage them in pleasantries as they pass by our booth.

Our trust remains in a Sovereign Lord. He alone can open eyes and ears and hearts. He has ever worked through a remnant -- and by His Grace, we are determined to be a part of that remnant.

And from the Holy Scriptures:

Romans 11:5
Even so then at this present time also there is a remnant according to the election of grace.

Thus, we endeavor to persevere.

From The Outlaw Josey Wales

Deo Vindice!
TRUST GOD!
STAY IN THE FIGHT!
NEVER GIVE UP!
NEVER QUIT!
CLICK HERE to view a PDF of our weekly paper, Just for Your Consideration.
CLICK HERE to be added to our email list.
Posted by Greg Wilson at 5:14 AM 2 comments:

Free Florida First will have a booth at the Newberry Watermelon Festival on Saturday, May 21, 2022 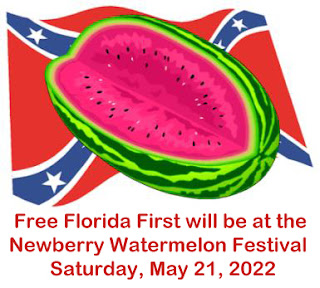 This will be the tenth anniversary of our first participation in the Newberry Watermelon Festival. In the past we have always had a pleasant and productive day.

Nevertheless, we remain alert to potential conflict in light of the current political atmosphere, particularly given Newberry’s proximity to the socialist enclave of Gainesville (home of the Marxist University of Florida). But thus far we have experienced very little negative feedback. Still, we never know when BLM or Antifa or some other group of communist agitators may discover us -- regardless, we shall soldier on by the Grace of God.  His will be done! 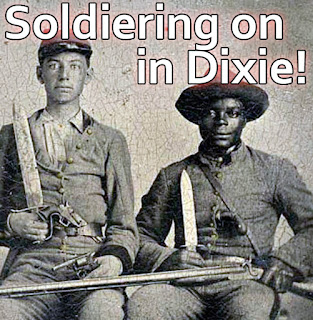 We always sell a significant number of our flags and meet many like-minded folk.

The event is scheduled to be held from 9am-3:30pm at the Country Way Town Square in Newberry, Florida. Why don’t you come out and introduce yourself to us! (NOTE: Admission is free, but there is a parking fee of $5 per vehicle.) 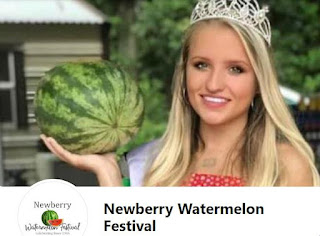 Every year we set up booths at several area festivals. It is an opportunity to get ourselves before the public and let folks know that some of us still strive to stand in the old ways and ask for the old paths. We proudly display the banners of our fathers and encourage folks to work for a Free, Independent, Godly, Prosperous, and Traditionally Southern Florida.

Jeremiah 6:16a
Thus saith the LORD, Stand ye in the ways, and see, and ask for the old paths, where is the good way, and walk therein, and ye shall find rest for your souls. . . .

We believe that it is increasingly important for us to show our devotion to the principles that undergirded the Confederate States of America and to make our presence known in our local community.  We strongly advocate for individual liberty and a minuscule government that is truly by the consent of the governed. Won’t you consider joining with us?

Here’s what our booth will look like (we shouldn't be hard to find): 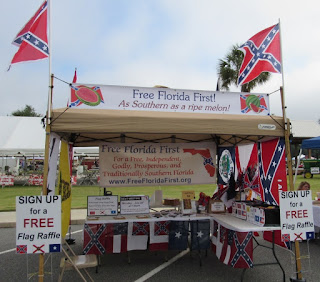 And here are some of our compatriots who have manned the booth with us: 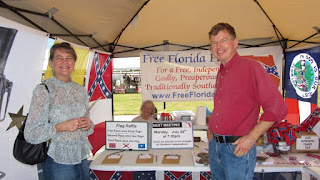 So, come out to the Watermelon Festival, visit with us, and buy some flags to help support our efforts, and then go home and fly them, to show your own commitment to liberty and truth. 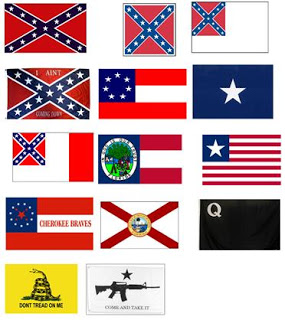 The proceeds from our sales help us to continue our work for liberty and truth.

Stand up and show your colors and FIGHT FOR DIXIE! 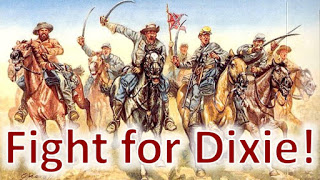 By the Grace of God we will continue to do so!

Deo Vindice!
TRUST GOD!
STAY IN THE FIGHT!
NEVER GIVE UP!
NEVER QUIT!
CLICK HERE to view a PDF of our weekly paper, Just for Your Consideration.
CLICK HERE to be added to our email list.
Posted by Greg Wilson at 5:28 AM No comments: