Were You Armed in Church this Sunday? 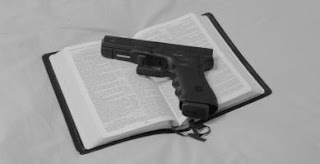 This past Sunday (9/24/17) a black man arrived at a predominately white church in Tennessee and killed one woman and wounded seven other people, including the pastor and his wife.

The story was not easy to find, appearing at the bottom of page 5 in my local paper. Had it been a white man in a black church -- well, you’ve seen the rest of that narrative played out.

To add insult to injury, the perpetrator was a Sudanese immigrant, who came to the US some years ago.

After fatally shooting the woman in the parking lot, the perp entered the church building and continued shooting. A church usher confronted the gunman and during the ensuing struggle the intruder was wounded with his own gun, allowing the usher to retrieve his own gun from his vehicle in the parking lot. The attacker was then held at gun point until police arrived.

This episode calls for at least a few comments (there could be many more):

2 – You should ALWAYS be armed – ALWAYS. I don’t know Tennessee law about carrying in church, but unless the church had their own armed security and a metal detector, the “sheep dogs” in the congregation should have been carrying. Even then, I think I would find another church if the church sought to disarm me, for any reason. My right to defend myself, and hence to be armed, is God-given and not granted by, nor legitimately restricted by, the state or anyone else. If the “law” would disarm me, then in the immortal words of Charles Dickens’ character,  Mr. Brumble: “the law is an ass.”

3 – Police CANNOT protect you. They show up after the fact, they take perps into custody and draw chalk lines. (Not to mention confiscating guns used for legitimate defense and oft times even arresting those who actually defended their persons and their property). THE POLICE ARE NOT YOUR FRIENDS, but we will save elaboration on that topic for another time.

4 – Perhaps, just perhaps, we should evaluate the policy of taking in folks from foreign cultures with foreign values and foreign morals.

So, as I asked in the title of this article: Were you armed in church this Sunday?

This is how I preach in the pulpit every Sunday. I think it my duty to be openly armed as an example and encouragement to others -- AND as a discouragement and warning to some others as well. 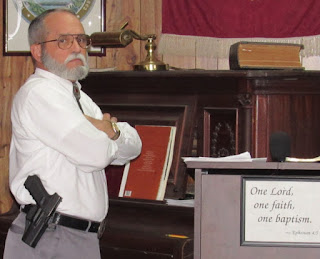 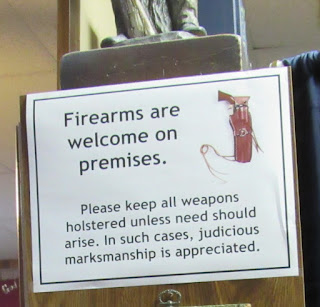 FYI, Florida does “permit” carrying in church, but does prohibit open carry in public. However, our meeting house is in the bottom floor of my own residence, so I may openly carry in my own home and I may encourage others to do so as well. 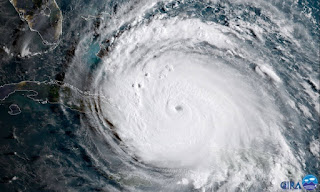 Those of you who are on our regular mailing list already know that the Lord spared us from major damage during Hurricane Irma. The storm had greatly degraded by the time it reached us.

We lost power, cell phone & internet, but otherwise we were largely unscathed.

However, preparing for what we thought might possibly be a major storm and then dealing with the aftermath, though relatively minor, presented us with many learning opportunities. Admittedly, my wife and I went through the very worst of Hurricane Andrew in South Florida, so this was not our first rodeo, but we still learned some new lessons and were prompted to remember some old ones. And Andrew was a longtime ago. 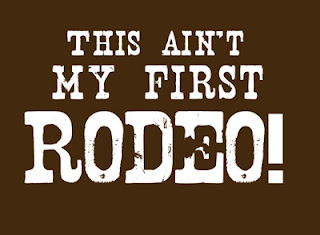 This past Monday, our folks discussed the various lessons learned from Hurricane Irma at our Free Florida First meeting. Below I share them in outline form.

Additionally, there is a printable PDF available here:
http://libcfl.org/sermons/Preparation_Lessons.pdf

And you may also listen to an audio of the details of our discussion at the link below, if you are so inclined:
http://libcfl.org/sermons/091817fff.wma

It is our prayer that these thoughts and experiences might be of some assistance to others in the future. We understand that they are far from exhaustive.

Preparation Lessons from Hurricane Irma
(redundancy & backups for everything)
1.     Mental / Spiritual
- Trust a Sovereign God – come what may

5.     Communications
- Landline and at least one plug in phone
- Cell Phone
- Internet
- FRS

Prepare for what is to come

We are busy battening down the hatches for a possible visit from a nasty hurricane by the name of Irma. 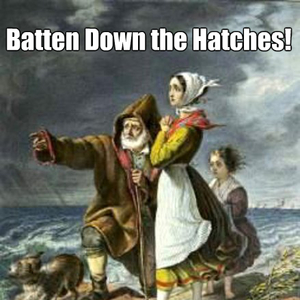 So this week’s blog will be very short.

Now we may or may not be hit by Irma, but folks are rightfully making preparations.

I can’t help but think of another arrival that is on the horizon. Jesus Christ is going to return to this earth and this time it will not be as a meek and suffering servant, but as a conquering warrior. Very few give this momentous event any thought at all.

Revelation 19:11-21
And I saw heaven opened, and behold a white horse; and he that sat upon him was called Faithful and True, and in righteousness he doth judge and make war.  (12)  His eyes were as a flame of fire, and on his head were many crowns; and he had a name written, that no man knew, but he himself.  (13)  And he was clothed with a vesture dipped in blood: and his name is called The Word of God.  (14)  And the armies which were in heaven followed him upon white horses, clothed in fine linen, white and clean.  (15)  And out of his mouth goeth a sharp sword, that with it he should smite the nations: and he shall rule them with a rod of iron: and he treadeth the winepress of the fierceness and wrath of Almighty God.  (16)  And he hath on his vesture and on his thigh a name written, KING OF KINGS, AND LORD OF LORDS.  (17)  And I saw an angel standing in the sun; and he cried with a loud voice, saying to all the fowls that fly in the midst of heaven, Come and gather yourselves together unto the supper of the great God;  (18)  That ye may eat the flesh of kings, and the flesh of captains, and the flesh of mighty men, and the flesh of horses, and of them that sit on them, and the flesh of all men, both free and bond, both small and great.  (19)  And I saw the beast, and the kings of the earth, and their armies, gathered together to make war against him that sat on the horse, and against his army.  (20)  And the beast was taken, and with him the false prophet that wrought miracles before him, with which he deceived them that had received the mark of the beast, and them that worshipped his image. These both were cast alive into a lake of fire burning with brimstone.  (21)  And the remnant were slain with the sword of him that sat upon the horse, which sword proceeded out of his mouth: and all the fowls were filled with their flesh.

God alone can open a man’s eyes to the reality of this coming judgment, but the time is surely at hand.

So as many of us prepare for the arrival of a monster storm, may the Lord be pleased to awaken many to an even greater coming event.

CLICK HERE to be added to our email list.
Posted by Greg Wilson at 4:09 AM No comments: