If They Mean to Have a War, Let It Begin Here.

Folks, this is not a new topic for me. I’ve hit upon it several times before, but if you cannot see the handwriting on the wall you are deliberately shutting your eyes to the truth.

If you do not have a gun and if you plan on ever having one, now is the time to get it! You can still shop around and find an AR-15 for less than $700. All too soon you may not be able to find one for any price. 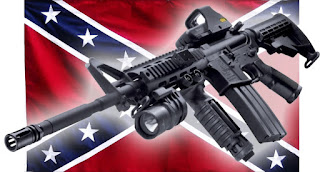 I would also add, that if you are inclined to surrender your guns to a tyrannical government, when they make them illegal, then just don't bother.

The words of Samuel Adams come to mind: "If ye love wealth better than liberty, the tranquility of servitude better than the animating contest of freedom, go home from us in peace. We ask not your counsels or arms. Crouch down and lick the hands which feed you. May your chains set lightly upon you, and may posterity forget that ye were our countrymen."

Now is the time to determine what your response will be should some tyrant come for your guns.

In Daniel 1:8 we are told: "But Daniel purposed in his heart that he would not defile himself with the portion of the king's meat, nor with the wine which he drank: therefore he requested of the prince of the eunuchs that he might not defile himself."

The tense of the verb translated purposed indicates that this was a decision that Daniel had already made BEFORE he was faced with the “crunch time.” He had ALREADY purposed in his heart not to defile himself, come what may. I know that I have ALREADY purposed in my heart, that by the Grace of God, I will not submit to the chains of slavery for myself, my children, or my grandchildren.

If you have already determined not to resist the tyranny, then prepare yourself for total subjugation to an all-powerful state.

Some of  politicians are advocating mandatory “buying backs” of the firearms that citizens possess. Explain to me: How exactly are they going to “buy back” something that NEVER belonged to them in the first place? Ask yourself, exactly how much is your freedom worth? (Not to mention the freedom of your children and grandchildren.)

The politicians can do as they will, my rights are not dependent upon the Second Amendment, nor upon the Constitution. My rights come from God. 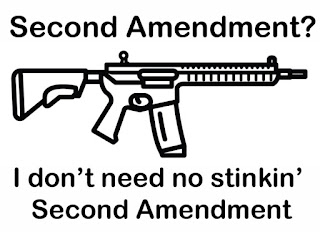 You had best determine now what you are going to do when they come for your guns. And if you are going to meekly turn them over, may I suggest that you give them to someone who knows what to do with them and has purposed in his heart not to defile himself or willingly allow the enslavement his family.

You might also consider what you are going to do when your son or daughter, who serves in the Empire’s military or police, comes to collect your guns. Perhaps it is better to ask yourself: “Why exactly are they serving the Evil Empire at all?” 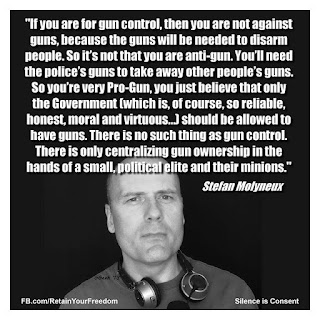 We might also ask ourselves: “How many of us that love freedom and will not surrender our guns are they willing to slaughter in order to usher in their gun-less utopia?”

We may very soon have that question answered.

Thankfully my trust is in a Sovereign God who is working His perfect will in all things. By His Grace may we conduct ourselves as Christians and as men.

1 Corinthians 16:13
Watch ye, stand fast in the faith, quit you like men, be strong.

Let us remember and take to heart the orders issued by Captain John Parker at Lexington Green when the British came to confiscate the guns of the American colonists: “Stand your ground. Don't fire unless fired upon, but if they mean to have a war, let it begin here.” 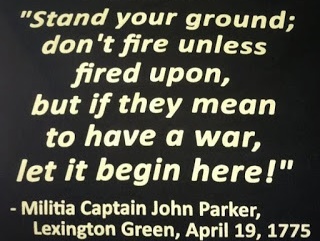