Robin Hood . . . just let the government do the stealing for you

We do have a local broadcast channel called MeTV that carries old shows from my youth -- from the 50’s forward. I suppose other than the News I watch MeTV as much as anything else.

Last week I saw an old Andy Griffith show that was first aired in 1963. I would have been thirteen years old at the time.

Something in the show really caught my attention and reaffirmed to me that television has been an anti-liberty propaganda tool almost from the beginning. I’m sure there’ve been some worthwhile things on television, I just can’t think of any at the moment.

In this episode entitled “Opie and His Merry Men,” Opie and his friends are playing Robin Hood out in the woods when they come upon a bum. I realize that there are no bums anymore, just “homeless people,” but in 1963 there were still bums. As was the case with most bums back in 1963, this fellow did not work and had absolutely no desire to do so. He did, however, manage to convince Opie and his friends to play Robin Hood in real life and bring him food and other things from their own homes. When Andy discovers what is taking place, he and Opie have a heart to heart talk in which Andy explains that “stealing is stealing” and that the boys ought not to have taken the things they did and that it was simply against the law. The dialogue then proceeds as follows:

Opie: Robbin’ from the rich to give to the poor . . . We was just doing a good deed.

Andy: We do that all the time, too. We take from the rich and give to the poor, only we do that by law, by taxes. Folks that’s too old or too sick to take care for themselves, and need help we give it to them.

Where I’m from, we would call that socialism, but perhaps that’s just me.

I do believe that we have a Christian obligation to those who truly cannot take care of themselves. But in no way is this a function of government. It is a function of family and church and organized VOLUNTARY charities.

Paul’s words to the saints in Thessalonica are still true:

2Th 3:10-12  For even when we were with you, this we commanded you, that if any would not work, neither should he eat.  (11)  For we hear that there are some which walk among you disorderly, working not at all, but are busybodies.  (12)  Now them that are such we command and exhort by our Lord Jesus Christ, that with quietness they work, and eat their own bread.

As Andy said, “stealing is stealing,” however, doing it under the cover of law, by legislation or majority vote, still doesn’t make it right. All agree that if I rob my neighbor on the left to feed my neighbor on the right that I am wrong. How is it that when we do the same thing as the corporate entity of government it becomes right? 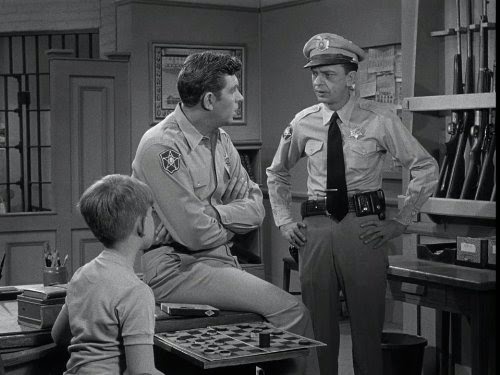 Sure we all liked Andy, and he was a great fellow, but his words to Opie may help explain that video he made in support of Obamacare in 2008.

It may also explain some of the fruits of tyranny and socialism that we are now harvesting, perhaps as the result of some seeds planted in malleable minds back in 1963.