We've been rescued by the party of Lincoln!

Some folks seem to be giddy over the GOP's victories in the recent election.
Evidently the party of Lincoln will lead us all into the Promised Land.

If you really believe there will be any significant changes, you simply have not been paying attention to the last 150 years or so.

Even considering relatively recent history. Remember Reagan was going to decrease the size of government and close down various cabinet departments like the Department of Education, except he didn't and government only grew larger and more intrusive.

Newt Gingrich promised a "Contract with America" and a restoration of Constitutional government, except it never happened.

In 1924, G. K. Chesterton spoke an obvious truth:  “The whole modern world has divided itself into Conservatives and Progressives. The business of Progressives is to go on making mistakes. The business of Conservatives is to prevent mistakes from being corrected. Even when the revolutionist might himself repent of his revolution, the traditionalist is already defending it as part of his tradition. Thus we have two great types -- the advanced person who rushes us into ruin, and the retrospective person who admires the ruins. He admires them especially by moonlight, not to say moonshine. Each new blunder of the progressive or prig becomes instantly a legend of immemorial antiquity for the snob. This is called the balance, or mutual check, in our Constitution.”

You can bank on it -- all that these Republicans will do is consolidate the tyrannical policies instituted by the "progressives." There will be no real change on any of the major issues of the day.

It's time for the restoration of small, local and accountable government, by secession from the Amerikan Empire.

Regardless, the evil empire will collapse soon enough under its own weight. Just pray that you are not crushed under it. 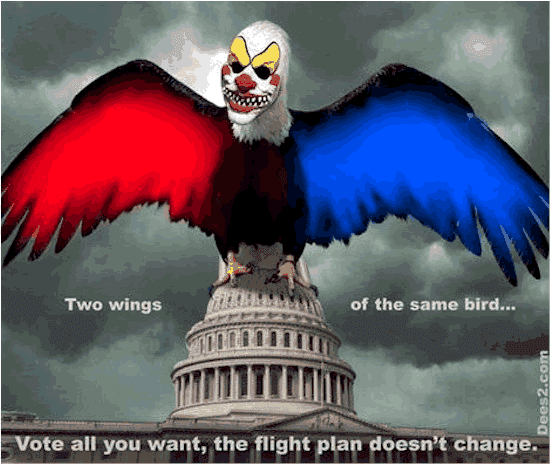