Should we vote for the lesser of two evils?

Should we vote for the lesser of two evils? How, pray tell, would we even be able to determine that, given the two candidates that are being put forth by the major political parties? 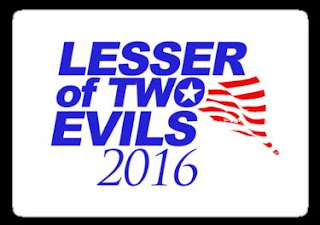 Most of the folks I know, who hold views that are somewhat compatible with my own are advocating Mr. Trump as the lesser of the two evils. Many insist that it is imperative that folks like myself vote for him to avoid a Hillary presidency.

You might consider the following quotes from Mr. Trump and explain to me again why I should vote for him.

* Mitt Romney “is the steady conservative who can restore America’s future.” (2012)

* “Jeb Bush is a good man. I’ve held fundraisers for him. He’s exactly the kind of political leader this country needs now and will very much need in the future. … He’s bright, tough, and principled.” (2000)

* “Oh, yes, he’s a champion. [Barak Obama] I mean, he won against all odds. If you would have looked—when he first announced, people were giving him initially no chance. And he’s just done something that’s amazing. He’s totally a champion.” (2009)

* “I think that a lot of people will be looking at Hillary’s record as secretary of state, and she will be defending that, and I’m sure she’ll do a good job of defending it.” (2013)

* “Qadhafi in Libya is killing thousands of people … We should go in, we should stop this guy, which would be very easy and very quick.” (2011)

* “I generally oppose gun control, but I support the ban on assault weapons and I support a slightly longer waiting period to purchase a gun.” (2000)

* Concerning Princess Diana, Howard Stern asked Trump in the interview. “You could’ve gotten her, right? You could’ve nailed her.” Trump replied: “I think I could have.” (1997)

I realize that in many cases Donald Trump now claims positions quite contrary to those set forth above. But the fact is, you can quote Donald Trump on virtually both sides of any issue that you can think of and what’s to say that he won’t change his views again tomorrow. He’s already flip-flopped on numerous issues during this campaign, in some cases literally overnight. How can you trust anything that comes from his mouth?

He is obviously a man without a rudder, without a moral compass, without integrity.

So you Christians who are bound and determined to vote for him as the lesser of two evils . . . be my guest . . . personally, I couldn’t live with myself.

Explain to your children how you are voting for a man who has been married three times and who brags about his marital infidelity. Then feign astonishment as Amerika plunges into a moral cesspool.

Exactly what does guide Donald Trump? What are his foundational principles? The Bible? The Constitution? I believe it is quite evident that he is guided by neither of those. Does he just make it up as he goes? Apparently so, whatever works, whatever Donald wants.

For the record, I have not voted for any of the major political party candidates for several decades. So you might want to take that into consideration. I have voted for third parties in the past. I have more than once written in “Jefferson Davis.” I have entirely skipped voting at all.

As it stands now, I probably won’t vote in a national election again. I am convinced that it makes no difference whatsoever. The establishment’s candidate will win, regardless of their party affiliation and things will only deteriorate.

I’m also disinclined to vote in local elections any more as well, generally there is little real choice there either.

Folks get all excited about the election cycle . . . and win or lose . . . nothing changes. 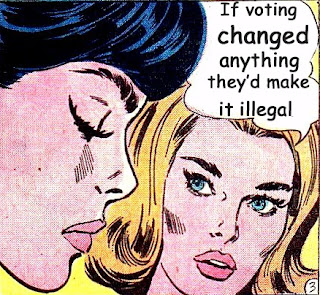 We need to wipe the slate clean and start all over again.

I believe that God may be just about ready to accomplish that . . . and I don’t think that voting for Trump or Hillary will make a lick of difference.