God and Our Rights

The ignorant, the biased and the hostile often accuse our Confederate forebears with launching a war to perpetuate slavery.

Nothing could be further from the truth.

In his first inaugural address the yankee president said: “I have no purpose, directly or indirectly, to interfere with the institution of slavery in the States where it exists. I believe I have no lawful right to do so, and I have no inclination to do so.” Lincoln also addressed the proposed Corwin Amendment which would have prohibited the Federal government from interfering in the institution of slavery. Of that amendment Lincoln said: “I understand a proposed amendment to the Constitution . . . has passed Congress, to the effect that the Federal Government shall never interfere with the domestic institutions of the States, including that of persons held to service ... holding such a provision to now be implied constitutional law, I have no objection to its being made express and irrevocable.”

So had the South been desirous of maintaining slavery in perpetuity it could have remained in the Union and been assured of that.

No, the causes for which Southerners struggled were much more fundamental. They were individual God-given rights. These rights were increasingly being subjugated by the Federal government and Lincoln’s election only promised their further erosion.

I am fortunate to be the descendant of several Confederate soldiers and to be collaterally related to many more.

One of my great-great-grandpas was John Cauthen Strickland, a Sergeant in the Marion Light Artillery from here in Florida. That unit was organized on Amelia Island and became a part of General Edmund Kirby Smith’s Army. They were complimented for their gallantry at the Battle of Richmond, Kentucky in 1862. Later, they became a part of Bragg’s Army and participated in the various campaigns in Georgia, Chickamauga, Missionary Ridge, etc. They later participated in the Atlanta and Nashville campaigns while attached to General Cheathem’s division. In 1865 they fought against the yankee advance near Mobile, Alabama. When Mobile fell, they were transferred to General Richard Taylor’s department, eventually surrendering in Meridian, Mississippi in May of 1865.

Below is their historic Battle Flag. The first is a replica, made for me by a dear cousin, and the second is the original flag as it was on display at what was once the “Museum of the Confederacy” (and which is now the politically correct “American Civil War Museum”). 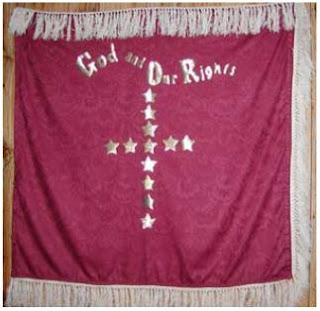 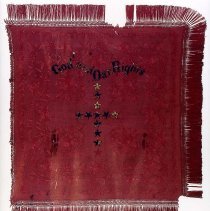 Note that the flag specifically indicates exactly what my grandpa and his Confederate brethren were fighting for. It was not the preparation of slavery, but for God and for their God-given rights. Furthermore, the Christian Cross indicates the foundation of their personal faith and the principles upon which their country (Florida) was established.

The replica of my great-great-grandpa’s flag is on the wall behind the pulpit at our meeting house. By the Grace of God, I intend to defend the cause and the truths for which he and his compatriots contended until God calls me home. So help me God! 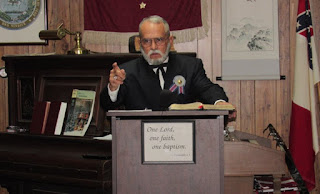