Support the troops? How about we just bring them home?

It seems that however wrong, immoral, and just plain wrong-headed Amerikan governmental policy may be, most folks still advocate that we should “support the troops.” 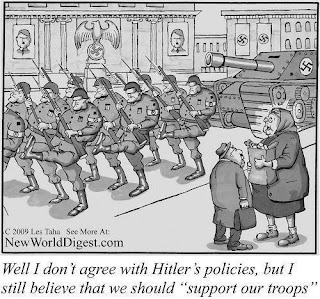 Personally, I fail to see the difference between the attitude depicted in the cartoon above and that exhibited in a recent meme posted by one of my Facebook “friends.” 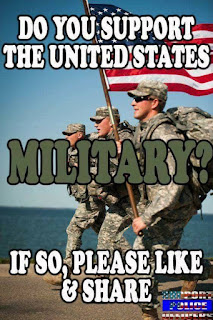 I do not hate them. I do not wish them ill. I recognize that the bulk of them are deceived and deluded pawns of the Amerikan Empire – But I certainly do not view them as “heroes” of any sort. 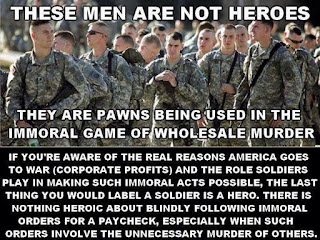 I personally served the evil empire for eight years as an infantry and intelligence officer of US Marines. I was college educated, at government expense, but I was ignorant and unthinking. I was willing to go wherever I was told to go and do whatever I was told to do, without really giving any consideration to the underlying reasons. 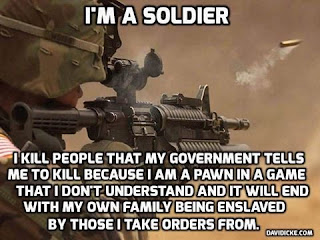 I was simply an order follower.

I am thankful that the Lord spared me from personally committing some of the worse of the crimes that soldiers are often called upon to commit. I am also thankful that there can be forgiveness for those who may have committed such crimes.

I was a Vietnam era veteran, but I was never “in country” or engaged in combat. My military record cannot compare with that of Marine Major General Smedley Butler, who is one of only two Marines to have been awarded two Medals of Honor.

General Butler had much to say of his time in the military and of how he eventually came to view it:

* My mental faculties remained in suspended animation while I obeyed the orders of the higher-ups. This is typical with everyone in the military.

* I spent 33 years and four months in active military service and during that period I spent most of my time as a high class muscle man for Big Business, for Wall Street and the bankers. In short, I was a racketeer, a gangster for capitalism. . . . Looking back on it, I might have given Al Capone a few hints. The best he could do was to operate his racket in three districts. I operated on three continents.

General Butler was not a pacifist. He understood that there are things worth fighting for; he just knew that those were not the things that the US military was used for:

* There are only two reasons why you should ever be asked to give your youngsters. One is defense of our homes. The other is the defense of our Bill of Rights and particularly the right to worship God as we see fit. Every other reason advanced for the murder of young men is a racket, pure and simple. I believe in adequate defense at the coastline and nothing else.

We learned of General Butler’s military prowess and courage in our studies of Marine Corps history, but we did not learn of the views that he ultimately came to embrace.

I encourage you to read General Butler’s book, War Is a Racket. It can be found online here:
https://www.ratical.org/ratville/CAH/warisaracket.html

Do I support the troops? Perhaps not, but I do have pity and sympathy for the ignorant and unthinking among them. I was once such myself. And I certainly do support bringing them all home. NOW! 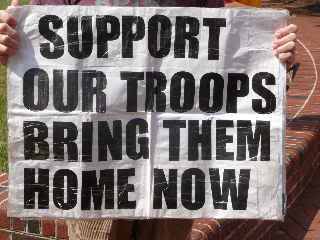 “Following orders” was not an acceptable defense at the Nuremberg trials. 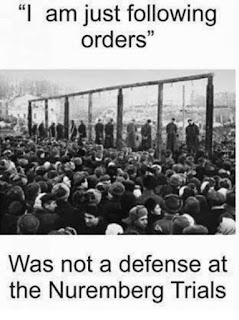 More importantly, there is a God in heaven and there will be an accounting. We are all accountable before Him for our actions, regardless of any “orders” we may have received.

So, I say again, as I have oft said before:

Mamas, don’t let your babies grow up to be Imperial Storm Troopers.

If we “honor and support the troops”, we are, by deed and word, encouraging young Southerners and young Christians to join the Empire military. By the Grace of God, I hope to never be guilty of such a thing. 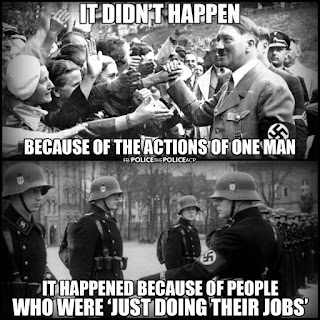 Each individual is accountable for his own actions, whether he is wearing a government issued costume or not. May we keep this truth before ourselves and before those with whom we have any influence.