Responding to Gross Ignorance and Animosity

As many of you know, Free Florida First recently had a booth at the Williston Peanut Festival. 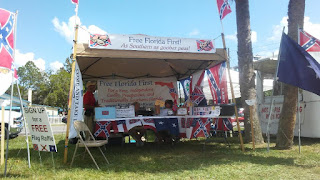 It did not take long to hear from an obviously low IQ individual, who was offended by our presence and our flags.

The Gainesville Sun is the local liberal rag of record, and they maintain a column called “Sound Off”, where folks can call in and leave brief comments on anything that happens to be on their little minds.

This Sunday’s edition of “Sound Off” contained the following posting:

The neo-Confederacy was on full display at last week’s Williston peanut festival. No doubt they had the full support of the local Chamber of Commerce. I wonder how African-Americans felt about the slavery flag flying.

Thus was opened an opportunity to respond. I certainly don’t expect to influence the individual who left the comment, but I pray that we might be able to reach some other folks that just might be ready to take a stand.

The paper limits “Letters to the Editor” to 150 words, so I had to be very careful in my response. Believe me, I wanted to say MUCH more, but past experience has taught me that they love to edit my letters to fit their agenda. So I responded in exactly 150 words. (I’m hoping they don’t count my signature lines):

Free Florida First’s presence at the Williston Peanut Festival was referenced in a recent "Sound Off." We are Confederates (not “neo-Confederates”) standing with our forebears for individual liberty and State sovereignty. We advocate for a free, independent, Godly, prosperous, and traditionally Southern Florida. Such would be a blessing to all Floridians, regardless of race or place of origin. Many of those manning our booth were born outside the South, but are now committed to our Cause. Our booth did not indicate the "full support" of the Chamber of Commerce any more than did the participation of both major political parties, various churches, etc. Had the poster stopped by our booth, I could have shared photos of several Black Confederate compatriots, who stand with us in support of the Confederate Flag. Indeed, one of my Black friends, Stanley K. Lott, wrote a book: “The American Flag is the Real Slave Flag.”

I’ll let y’all know what comes of it. I just now emailed them my letter. I don’t see how they can just ignore me, having published a comment from a detractor. 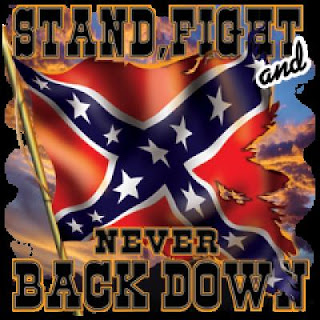 UPDATE: My letter was published in Thursday's paper (10/17). I’ll keep you advised of further reactions, I would expect that there will be some from the liberal college town of Gainesville.