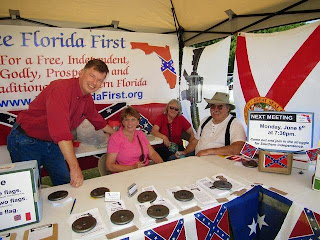 It was a very successful day.
1. Over 80 folks signed up for our flag raffle. It gives us an opportunity to contact them again via email and letter and to invite them to our next meeting and to be added to our email lists.
2. Many other folks who did not sign up for the raffle took literature about our organization and the things we promote. In particular, gun rights and secession. So we were able to place literature in the hands of well over 100 folks.
3. We gave out scores of small Battle Flags to the young folks who came to our booth.
4. A lady from the Republican booth down the way from us stopped by. In our discussions she indicated her dissatisfaction with the Republican field, including Rand Paul, whom she called a compromiser. I told her that she ought to join us in our booth and that secession was the only answer. She agreed that secession is constitutional and said that she should leave “before she loses her job.”
5. We “sold” several 3X5 flags, and actually made enough to cover our entry fee.
6. A young black man stopped by and signed up for our flag raffle. I noticed that he had a Battle Flag on a leather strap around his neck and on a para-cord bracelet around his wrist. I had a good discussion with him and shared an article with him from Walter Williams that asserted the Constitutionality of secession.
7. Some neocon stopped by promoting an upcoming “Heroes’ Day” to venerate the Imperial Storm Troopers of the Amerikan Empire.  By the time he left he had received an education on the real heroes who wore grey and who fought to protect their homes from the yankee invaders.
8. We had numerous productive conversations with all manner of folks. Many expressed their appreciation for us being at the festival and for “all that we do,” even though most probably knew very little about us.
9. My wife observed that more and more people show interest at every festival we attend.
10. Many folks are leery of being identified with us or being on our mailing list, but they are glad that we are here and taking a stand. Perhaps someday they will be ready to stand with us as evil men wax worse and worse and as the empire continues its inevitable decline.
It is important that we continue on -- that we show the flag -- that we do what we can to get the word out. 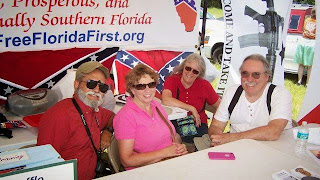