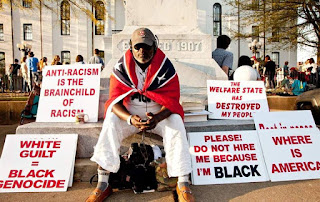 Anthony has long been a faithful advocate for the Southern Cause.

Here is an announcement from the SCV (Sons of Confederate Veterans)

The SCV Mourns The Loss Of Anthony Hervey22 July 2015

The Sons of Confederate Veterans has lost a brave and articulate friend and America has lost an independent voice for racial reconciliation and understanding. Anthony Hervey of Oxford, Mississippi was a warrior for his beliefs and those beliefs were rooted in a passionate and unequivocal understanding that he was a proud Son of the South.

His death, on Sunday, July 19th, appears to be because of the way he lived his life. Mr. Hervey and a companion, Arlene Barnum of Enid, Oklahoma were returning from a Confederate Flag celebration in Birmingham, Alabama when his car was forced off the road near Oxford by a carload of men who apparently were chasing him down. The Ford Explorer he was driving skidded and then rolled over several times, killing Hervey and injuring Ms. Barnum.

We of the Sons are outraged by this murderous act, and expect all law enforcement agencies to vigorously pursue a full investigation and to bring justice for Anthony Hervey and his family. We have called for the United States Justice Department’s Civil Rights Division to enter the investigation, for it is clear that he was killed because of his opinions and his race. Mr. Hervey was an African-American, as was his passenger, Ms. Barnum. Anthony Hervey’s outspoken support of Confederate Heritage appears to have played a part in this incident.

Hervey was well known as an unapologetic defender of the Confederacy and its symbols. He often appeared on television and radio stating his opinions and debating with any and all. He was the author of “Why I Wave the Confederate Flag: Written by a Black Man.”
We ask that every member pray for justice, understanding, and especially for the family of Mr. Hervey as they endure his passing. We also asked prayers for the brave Arlene Barnum as she heals from the attack. Both she and Mr. Hervey had family members who fought for the Confederacy.

We will never forget this brave warrior who fought for the healing of the South and helped to build a bridge to brotherhood. For he was indeed our brother.


Here is a quote from an article in  the Alabama Political Reporter further documenting Anthony's life and specifically the rally that he attended immediately before his death:
“Anthony Hervey addressed the gathered crowd for the 'Monumental Dixie Rally'.    Hervey told the people present there were no millionaire lawyers and businessmen standing with them today; because they are embarrassed to associate with working class Whites but when they need southern boys, White Southern boys and Black Southern boys, to fight their wars they come to us.    Then, when we come back home they limit our freedom of speech and perpetuate an erosion of our gun rights.”
You can read the entire article here:
http://alreporter.com/archives/2015/146-state/7999-author-activist-dies-after-addressing-southern-heritage-rally.html
Another tribute to Anthony may be accessed here ( Research Online):
http://www.researchonline.net/freedom/anthony_hervey.htm#.VbCsfbNVikq
Contributions to Anthony's widow may be made here:http://www.gofundme.com/hervey
===================================================

Someday Anthony may be counted as the first casualty in the Third War of Independence.

STAY IN THE FIGHT!
NEVER GIVE UP!
NEVER QUIT!
DEO VINDICE!