The USA: Too Big for Liberty

The monstrosity that is called the United States of America is far too big to offer anything like liberty and self-determination to its inhabitants.

Take the recent presidential election as an illustration. Consider the map below. There are 3100 counties within the states that constitute the USA. Donald Trump won 2600 of those counties and Hillary Clinton won 500. The map below depicts the counties won by Trump in red and those won by Clinton in blue. 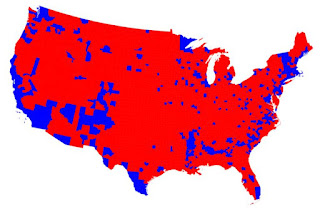 Now consider, that as physical beings, we all live in certain geographic areas; we all occupy certain real estate, whether they be large or small. In these areas we naturally form communities, as we associate with our neighbors, who are generally much like us and with whom we learn to live in peace because of our proximity to them.

Now reverse situation, suppose those in the red areas were to impose their will upon those who live in the blue areas. Would not this likewise be a situation devoid of any liberty or freedom or self-determination?

Washington, DC is the seat of a vast empire that extends over a vast geographical area. The politicians in DC wield tremendous powers over the nation as a whole. In particular the US President wields great power over the entire nation. Whether we like or not – whether that was how it was intended to be or not – that IS how it is! Whether US Presidents are elected by popular vote or the Electoral College or some other hybrid method, almost half of a huge population is disenfranchised and brought under bondage to the rest of the population.

The only solution that offers even a measure of freedom is to reduce government to a much, much smaller level. Restore local, accountable and sovereign self-government. I can learn to live with my neighbors, but how do I learn to live with liberals on the “Left Coast” or socialists in New England?  Why should I even want to attempt such a thing?

I don’t care how folks on the West Coast of California or New England or even in Southeast Florida live, just so long as they leave me alone to live as I would here in the rural sand hills of North Central Florida.

Sure there are details that need to be worked out if we dissect the Amerikan monster into manageably sized sovereign units, but this is the only path to lasting peace and liberty. What we now have is not working – it cannot work – and the longer it is forcibly maintained, the closer we draw to bloody wars of self-determination. Perhaps we can find solutions short of physical conflict.

Why not try self-determination? Why not try liberty? Why not try local self-determination? There may even be a place for something like the original Articles of Confederation that allowed for a loose cooperation between the states. Anything more leads to the sort of tyranny we now suffer under. A tyranny that is at the very least aided and abetted by the US Constitution, if not actually enshrined within it.

So, here in Florida, I would say: If you socialists want Dade, Broward, West Palm, Tampa, Orlando and the areas surrounding the communist indoctrination centers (UF and FSU), y’all are welcome to ‘em – good riddance – JUST LEAVE THE REST OF US ALONE!

Be mindful of this. You can only keep people in darkness and in bondage to something like the Amerikan Empire for so long, eventually something will give and if it is left to fester long enough that something is almost certain to be bloody and violent. 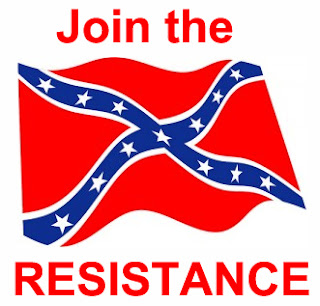