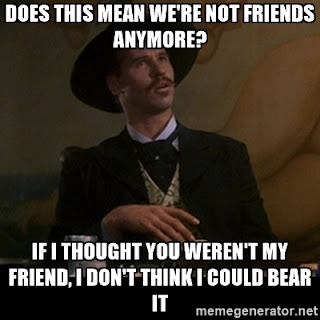 This week I was banned from the page of a “super patriot” who faithfully worships at the altar of the almighty amerikan state.

He had posted the photo below and I evidently did not show proper reverence for the uniform of the Evil Empire’s strong-arm men. 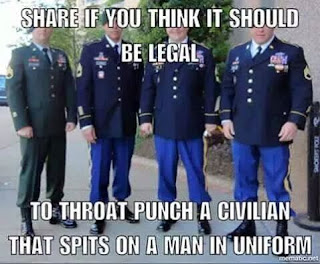 I commented as follows:

GW: And why should being in a government costume make a difference? If you spit on anyone you should receive a throat punch. But I suppose some animals are more equal.

Mr. Snowflake took umbrage at my remark and responded as follows:

NK: Greg my friend I sure as HELL don't think a MILITARY UNIFORM is a DAMN COSTUME. This type of comment puts you in a clown suite [sic]. You being a pastor you should realize those wearing the uniform have kept YOU SIR free to preach. One more post like this and your [sic] BLOCKED from seeing anything I post.

I thought I might make the effort to enlighten the ill-informed sheeple and replied as follows:

GW: Do as you wish NK. I wore the costume of a Marine Corps Captain; I served the empire for eight years as an infantry and intelligence officer . . . Now, compared to Smedley Butler, that ain't much at all. He wore the uniform of a Marine Corps Major General, was the recipient of two Medals of Honor; and wrote: "I spent thirty-three years and four months in active military service as a member of this country's most agile military force, the Marine Corps. I served in all commissioned ranks from Second Lieutenant to Major-General. And during that period, I spent most of my time being a high class muscle-man for Big Business, for Wall Street and for the Bankers. In short, I was a racketeer, a gangster for capitalism."

-- Fighting for my freedom?? I think not. Am I more or less free as a result of all the Amerikan adventures abroad??

Here’s Smedley book: "War Is a Racket", but don't get all confused by the facts.
https://www.ratical.org/ratville/CAH/warisaracket.html

It is indeed unfortunate that so many have been brainwashed by the empire. They repeat the phrase “the military is fighting for our freedom”, but when challenged they cannot explain how this is might be. So instead they cut off discussion, so as not to have their delusions assailed.

Many of them are, no doubt, good decent folks; folks who should be our natural allies; and yet they are devoted to the illusions of the Amerikan empire above and beyond anything else. They cannot or will not see the tyranny that is before their eyes.