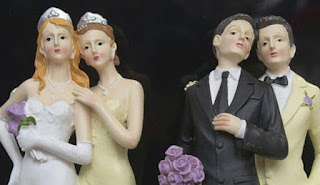 I know you’re thinking this must be a United Methodist Church or perhaps Episcopalian or United Church of Christ or maybe Unitarian/Universalist. But you would be wrong; it’s a Baptist Church (at least in name). That church should at least have the decency to call themselves something else . . . anything else . . . other than Baptist.

You can find more details in an article by Joe Kovacs on World Net Daily:

You can also read about the depraved pair on the church’s web site:
http://calvarydc.org/meet-our-ministers/

As I said when I shared Kovacs’ article on Facebook, “It’s enough to gag a maggot.”

Here’s a picture of the happy couple. 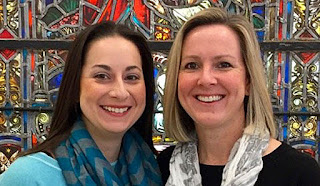 One of my friends commented: “aint dat jus peachy and they look sooo happy! they have no clue what awaits them.”

However one idiot, thoroughly steeped in Amerikan “culture” commented: “I don't know...I think it’s kinda hot”. To which I replied: “So is hell, Doug, so is hell . . .”

Kovacs included several Bible verses which condemn sodomy within his article. Ironically, he quoted from a modern perverted translation (The Living Translation). I believe that modern translations, such as the NLT have helped open the door to such widespread perversion within nominal “Churchianity.”

Below, I share those verses below from the King James Bible:

Thou shalt not lie with mankind, as with womankind: it is abomination. – Lev. 18:22

For this cause God gave them up unto vile affections: for even their women did change the natural use into that which is against nature: And likewise also the men, leaving the natural use of the woman, burned in their lust one toward another; men with men working that which is unseemly, and receiving in themselves that recompence of their error which was meet. And even as they did not like to retain God in their knowledge, God gave them over to a reprobate mind, to do those things which are not convenient; -- Romans 1:26-28

Do you know any folks who use the King James Version and promote sodomy? No, I didn't think so.

Well at least we will soon have someone in the White House who does not embrace and promote such depravity. America has been saved! Isn’t that right all you good Christian Trump voters? 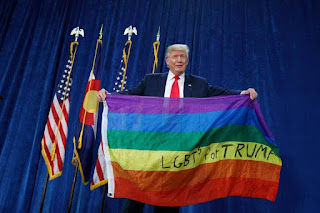 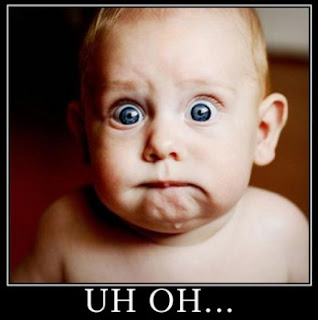 Amerika has been given “up unto vile affections” and “a reprobate mind”. We are getting exactly what we deserve, or as Paul says: “receiving in themselves that recompence of their error which was meet.”

Yes, you can stick Amerika with a fork. It’s done. 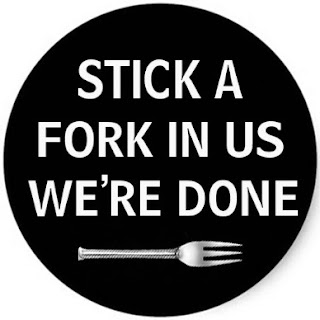